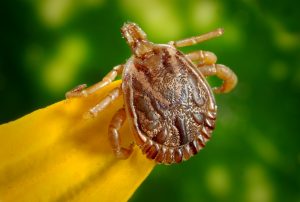 Fall is approaching fast and before we know it, winter’s here! Pest season is over, no more flies, mosquitoes, fleas and ticks! Many of us believe that pest season ends when cold starts to creep in, however you and your canine friend might not be safe from ticks yet! In fact, these little bloodsuckers, are pests that like to seek refuge in your home during the winter because they need heat and shelter to survive. Ticks can be active almost year around as long as they are in the right environment, comfortable temperatures and a nice host (your dog)! Most people notice problems with these little creatures in the spring and summer, this tends to be because we and our dogs spend more time outside.

What are these little bloodsucking creatures?

Ticks are a common species of an Ectoparasite that feeds on the blood of mammals, birds, and sometimes reptiles and amphibians. Animals and human beings can easily pick up ticks outdoors. Both dogs and cats are common carriers of ticks. These little pests can negatively affect your dog’s health by inserting their mouth-parts into your dog’s skin. They produce a glue-like substance that helps them remain attached to the skin, this allows them to feed on your dog’s blood. Note that some tick bites can cause serious illnesses such as Anemia, Lyme Disease, Ehrlichiosis or Rocky Mountain spotted fever.

For a full list of tick-borne diseases please check out this article.

Environments where Ticks are found

Ticks thrive in wood areas, shrubs, tall grasses, weeds, and leaf litters and will attach themselves to your pet or yourself. Ticks are attracted to the warmth radiating from your body. And latch on to the host to feed and engorge themselves on blood. Once they fall off inside your house, ticks like to stay in warmer humid areas such as carpets, beds, curtains, and other furniture. Tick infestations can be very time consuming to get rid off. Ticks can be found world wide. There are close to 900 different species worldwide. The United States houses about 90 different species, and about 23 different species can be found across Europe. Tick seasons make the news frequently as there has been an increase in animals and humans contracting the diseases they carry after bites.

The most common Ticks in the US are: 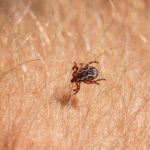 The most common tick species in Europe are:

Most common areas on your dogs body to see ticks

Some of the most common areas where they attach themselves are:

Note: remove ticks using tweezers or a tick removal tool, pull and Do not twist, wiggle or crush the tick, as exposure to its blood may allow it to transmit diseases. Dispose of the tick by killing it in alcohol or by flushing it down the toilet.

Some of the most common symptoms of tick bites are:

Pharmaceutical Options for Treatment and Prevention

Home Remedies for Treatment and Prevention

Certain oils can make a great tick (and flea) repellent for your dog, as a bonus make your pooch smell great!

Please use our base recipe below when using an Essential Oil

Please note that using essential oils directly on your pet’s skin can be harmful for their health. Always read the label and make sure you dilute the essential oils for use in sprays. For our cat owners, please use caution as certain oils like geranium, citrus and eucalyptus oils as they can be dangerous to your cat.

Click here For more information on a study for tick repellents

A simple recipe to make your own Tick repellent, with items you probably have sitting in the pantry. This recipe leaves your dogs coat nice and soft as well!

Spray the tick repellent on your pet’s dry coat, be careful not to get it in their eyes (or other sensitive areas). If your dog only goes outside for a morning/afternoon walk, spray your dog prior to going out. If your dog spends their entire day outside in a tick and flea “friendly” environment, make sure you spray them 2 to 3 times a day.